Humane Society International (HSI) launched its dog and cat welfare programme in Bolivia in 2012, including providing training to veterinarians and veterinary students in-country (See case study of strengthening veterinary capacity). This local veterinary capacity then provides high-quality, affordable and accessible veterinary care to dogs and cats, many who have never previously visited a veterinarian.

At the time of spay/neuter surgery, and with the guardian’s consent, the animal’s left ear is tattooed with a unique alphanumeric code. The code is entered into the clinical record for that animal, and thus is a visible, inexpensive, easy-to-implement and permanent method of identification. Clinic records are kept in original paper copy and some of the information is uploaded to an online database (Wise Monkey Foundation). The data is accessible by the program coordinator in Bolivia and HSI staff.

A tattoo can identify an animal as already sterilized, saving the animal from undergoing a second and unnecessary surgery. In addition, the unique alphanumeric code enables access to the guardian’s contact information and a lost animal can then be re-united with his/her family. This helps avoid unnecessary euthanasia as it encourages municipal zoonosis centers and animal protection organizations to contact the organization that created the tattoo and reunite the animal with his/her guardian. Until microchipping becomes more widely implemented, this is an inexpensive and immediately available alternative solution.

An alphanumeric code is a combination of letters with numbers, with each letter having a predetermined meaning established by the team in charge of the sterilization clinic. The letters can be accompanied by numbers which at the beginning of each year start with 1 corresponding to the first sterilized animal. Numbers are recorded in sequence, following the order of animals sterilized. The number is accompanied by a hyphen, followed by the year in which the surgery is performed.

Since its inception, the alphanumeric code identification system has helped to reunite dogs and their families. In one case, a dog hit by a vehicle was brought by the driver to a nearby veterinary clinic.

During intake, the technician noticed the tattoo and posted a picture of the dog and the tattoo on social media, where commenters eventually tagged HSI. Our team located the clinical records belonging to that alphanumeric code and called the owner, with the happy result that the dog and owner were reunited in less than 24 hours. In April of 2019, HSI’s tattooing convention helped reunite animals with their owners following a landslide which swept away dozens of houses, and left hundreds of people and their pets homeless and searching for each other. Two of the dogs rescued by firefighters had alphanumeric tattoos which enabled our team to notify the owners quickly regarding the whereabouts of their dogs.

Materials needed for manual tattoo (without using a tattoo machine)

The materials used are: 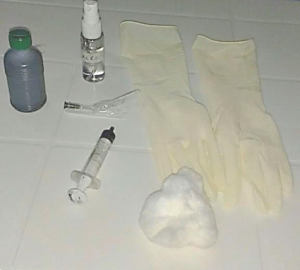 Take a look at our “Are We Making a Difference?” monitoring and evaluation guidance, and then use this interactive tool to help you choose which indicators to use to help you measure the impact of your dog population management programme. END_OF_DOCUMENT_TOKEN_TO_BE_REPLACED