Today at the 89th Annual General Session of the World Organisation for Animal Health, the OIE, the member countries voted to approve the update to Chapter 7.7, including a significant title change to Dog Population Management.

Who is the OIE?

The OIE is an intergovernmental organisation responsible for improving animal health worldwide. OIE has 182 member countries and each country assigns at least one person to be the OIE delegate, this is usually the Chief Veterinary Officer of the country.

A key role of the OIE is developing standards with expert working groups and in collaboration with member countries. These standards are written guidelines to help member countries improve animal health and welfare. These standards cover terrestrial and aquatic animal diseases, they also cover issues of importance to animal welfare, and it is in section 7 on animal welfare that we find Chapter 7.7 providing guidelines on dog population management.

Why does this chapter matter?

Although the OIE standards are not legally binding, member countries sign up to the OIE with the expectation and intention to incorporate the OIE standards in their national legislation; in this way the content of the standards can become legally binding within each country. The standards can also influence other policy instruments like national action plans and funding, so for those with the role of implementing dog population management they can be a very important advocacy tool.

Chapter 7.7 is part of the Terrestrial Animal Health Code and is accessed here.

This chapter originally joined the OIE standards in 2009 under the title ‘Stray dog population control’. This 2022 update presented to the 89th Annual General Session involved a significant text overhaul. However, these text and structural changes were mostly in pursuit of clarification, whilst the major concepts have mostly been sustained.

So what stays the same?

As this update can be considered more as an evolution and not revolution, lets also consider what has stayed the same in chapter 7.7.

How does this compare to ICAM’s DPM guide? 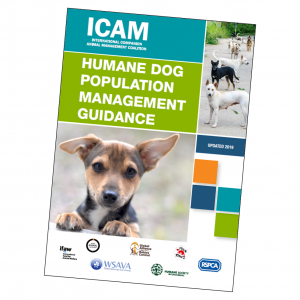 Our ICAM dog population management guidance was initially published in 2007, with an updated version launched in 2019. There are many similarities between ICAM and OIE’s guidance on this same subject. Including an evidence-based approach to designing and adapting dog population management, a role for national government in enabling local implementation and the need to act humanely in the delivery of all DPM actions.

The main difference is in the level of detail, with ICAM providing more guidance on field application, including case studies and ‘how-to’ resources. We also provide more emphasis on the role of community engagement, as part of 4 foundational components of a DPM system, providing the legal basis, political will and social motivation to drive effective DPM ‘services’ – our term for ‘measures’. Conversely, the OIE chapter is more prescriptive about roles and responsibilities, recommended regulations and standards of dog housing and euthanasia methods.

These similarities are important. We see ICAM’s work and guidance supporting this OIE chapter in implementation. The chapter provides an excellent framework that when enacted humanely, sustainably, and thoughtfully – designed and adapted using an evidence-base – will lead to a positive dog-human relationship, maximising the benefits of a harmonious coexistence and minimising risks to both human and animal health, welfare and the environment. We are currently developing an online DPM course that will bring our DPM guidance to life, allowing people to interact and navigate their own learning journey throughout the story of humane and effective dog population management. Throughout this course we are referencing articles and quotes from the OIE chapter, establishing where we are expanding OIE guidance or referencing where the OIE standard provides greater detail. We believe the learning enabled by our online DPM course, supported by the policy framework provided by the updated OIE standards, will together provide another step forward for humane dog population management implementation.

We hope the humane DPM field welcomes this OIE chapter 7.7 update and can see their good work reflected in these standards. Taking this as an opportunity to advocate for more support and celebrate where they are achieving benefits through internationally recognised approaches, leading to better outcomes for people and dogs.

ICAM supports the development and use of humane and effective companion animal population management worldwide. The coalition was formed in 2006 as a forum for discussion on global dog and cat management issues.

Our key goals are to:

Take a look at our “Are We Making a Difference?” monitoring and evaluation guidance, and then use this interactive tool to help you choose which indicators to use to help you measure the impact of your dog population management programme. END_OF_DOCUMENT_TOKEN_TO_BE_REPLACED